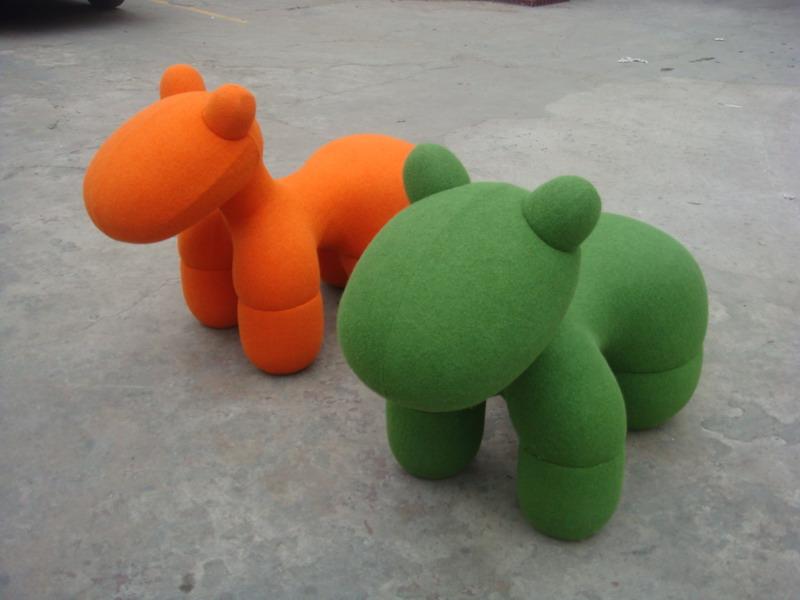 Description
The Pony by Studio Eero Aarnio is a delightful classic of Finnish design from 1972. Featuring a moulded foam body with fabric upholstery, the Pony looks like an oversized toy, but its dimensions are well suited for adult's size.

The Pony shows the play of fantasy and imagination which is so characteristic for Eero Aarnio, and the seat has been designed with comfortability and ergonomics in mind. A perfect eye-catcher in the living room, hallway and, why not, in the office as well, Pony is the ideal for both people of any age.

The Story of Pony

In 1972 the Aarnios lived in Tontunmäki, where Eero utilized their garage as his work space. Although his previous pieces had already possessed uniqueness and characteristics, Eero describes Pony as his first very unusual design. He thought about chairs. One can sit almost anywhere. A seat doesn’t even have to be a chair or a sofa. One can sit on the stairs, on a rock, on a tree stump, on a horse, on a pony… He decided to design a soft animal figure, which you could sit on, like riding a horse.

In 1973 the first sketch of the Pony was sent to Asko Furniture company, who was the main producer of Eero Aarnio’s designs. They completed the basic form for the seat and sent it by bus to Puumala, where Eero continued developing the prototype at the Aarnio family’s summer cottage. Eero thought the first mold was decent but needed enhancing. In the country side, there was plenty of space to work, and since the body was made of polystyrene, he didn’t mind getting his hands and surroundings all over it. Eero bought some modeling clay and worked further with the body. After the basic form was finished, he painted the first Pony white.

From the start Eero knew the Pony needed upholstering. The process for the upholsterer is extremely challenging and difficult, requiring rare talent in hand crafting. As a result, one can only admire the magnificent seaming, intertwining together with the form of the body and flexibility of the fabric. However, some Ponys out there do not have their ‘furs’. Batches has been produced of concrete to serve as road blocks. Ponys made of concrete are not easily moved around, since they weigh as much as 250kg.

Eero Aarnio’s Pony is no regular chair. The designer himself prefers to rather call it a seat. Eero designed the Pony first and foremost to provide a comfortable form. The size came out of ergonomics, it is the perfect height for back and feet to rest. One can ride it or sit sideways on it. Eero initially designed the smaller size for children, however, the young have always been as keen on to climb on the larger Pony. It looks like a child’s oversized toy, even though the dimensions are designed for adults. “We are all big kids, of course”, says Eero Aarnio.

Pony is often referred to as intriguing the inner child in adults. Eero’s design aesthetics have a certain playfulness and humor, which have been very salient in his creativity and thinking process. Eero believes certain pieces should have a certain personality, one that suits them perfectly. For example, color is a key part of the message and a way of communicating for Eero. For the Pony, Eero prefers the colors green and white. Although, speaking from experience, for a family with children, white can be quite sensitive… 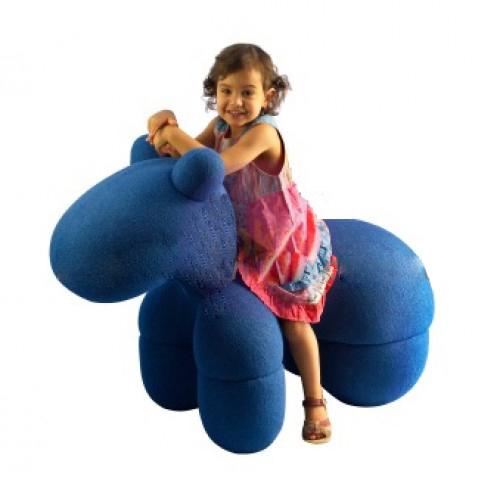 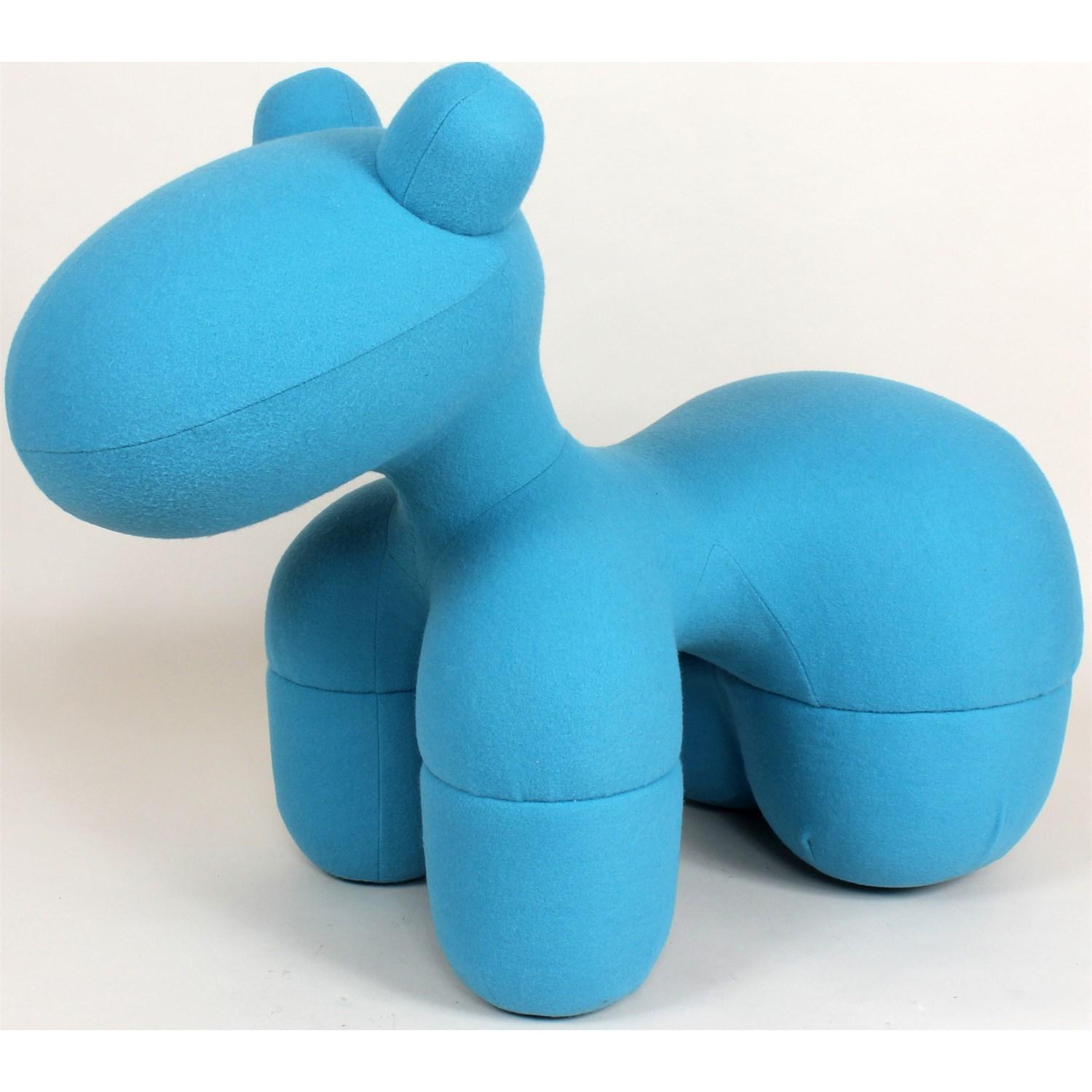 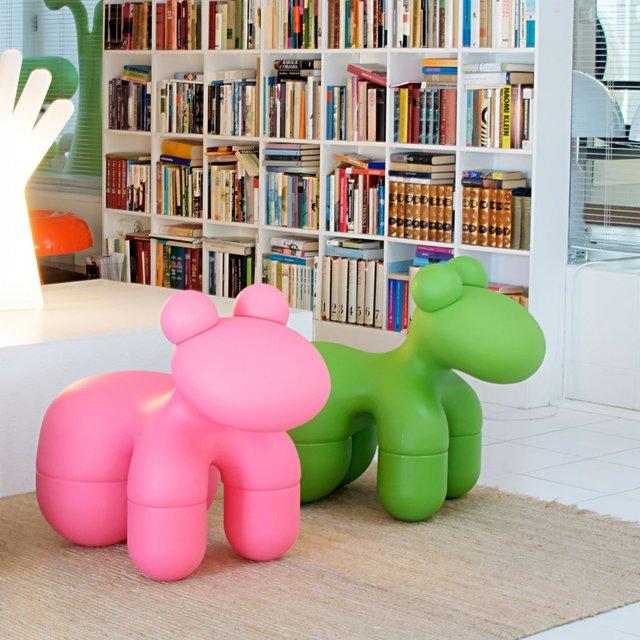 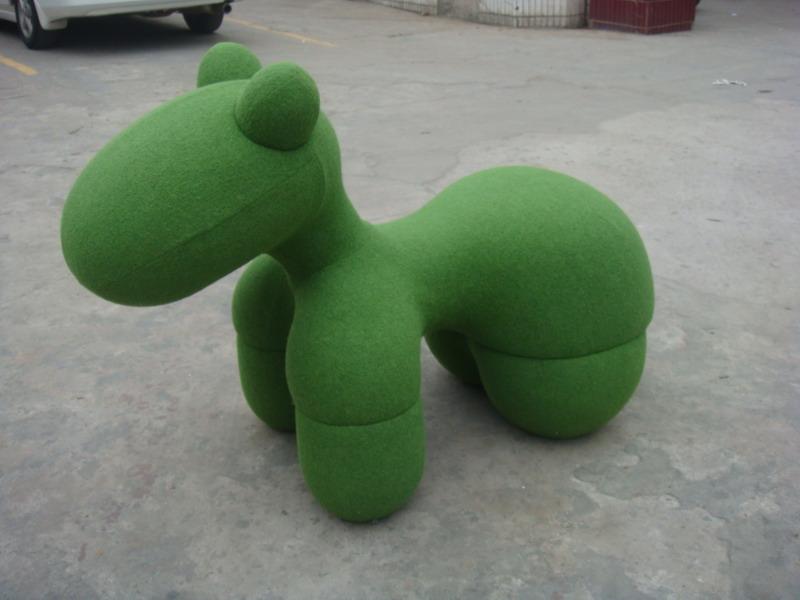 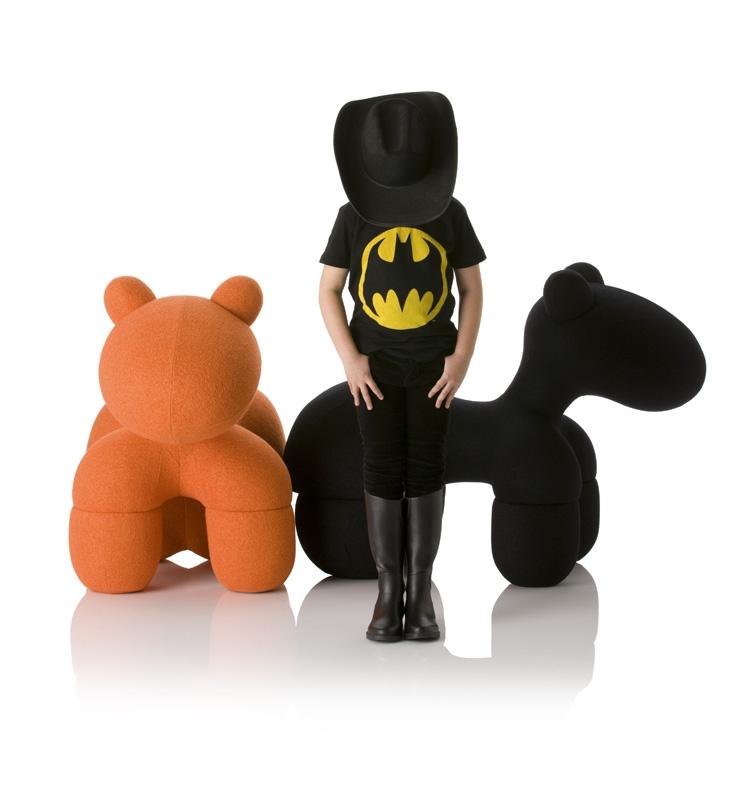 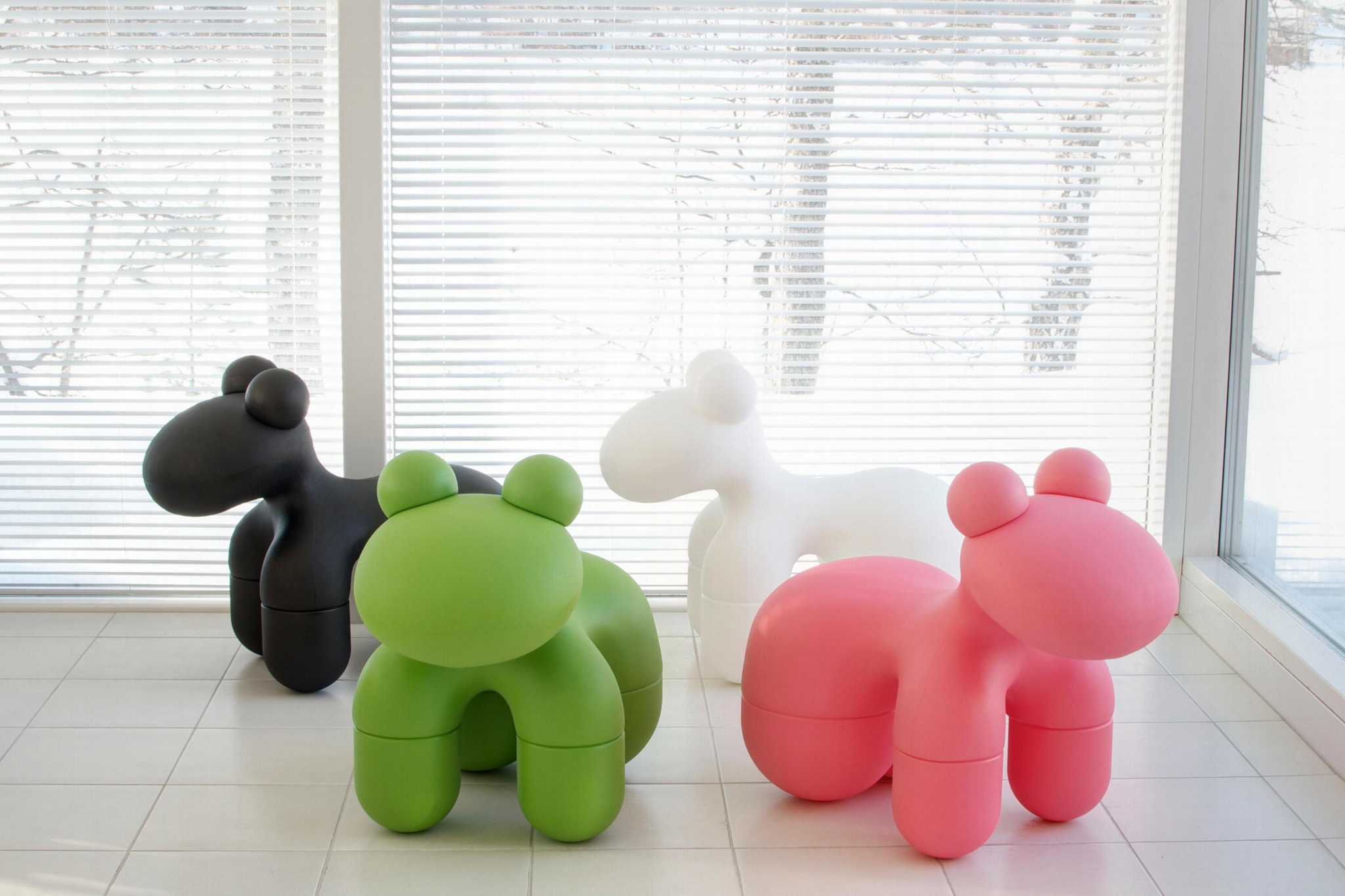 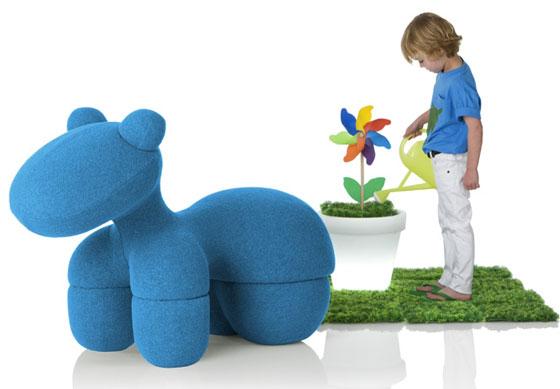 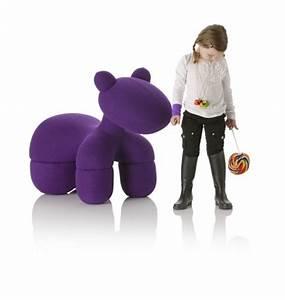 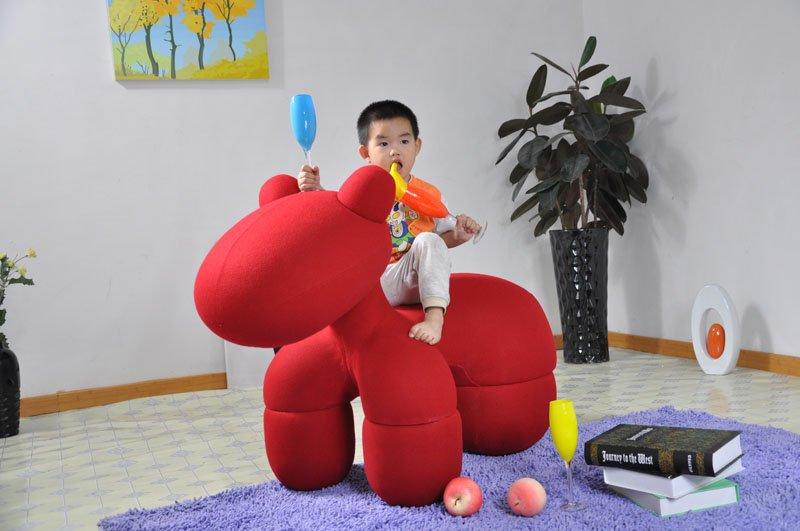 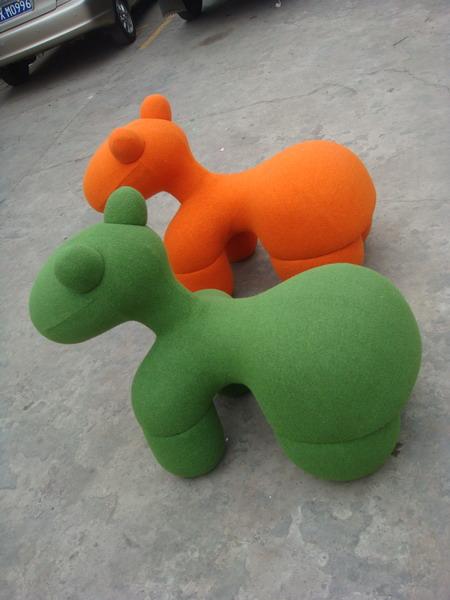 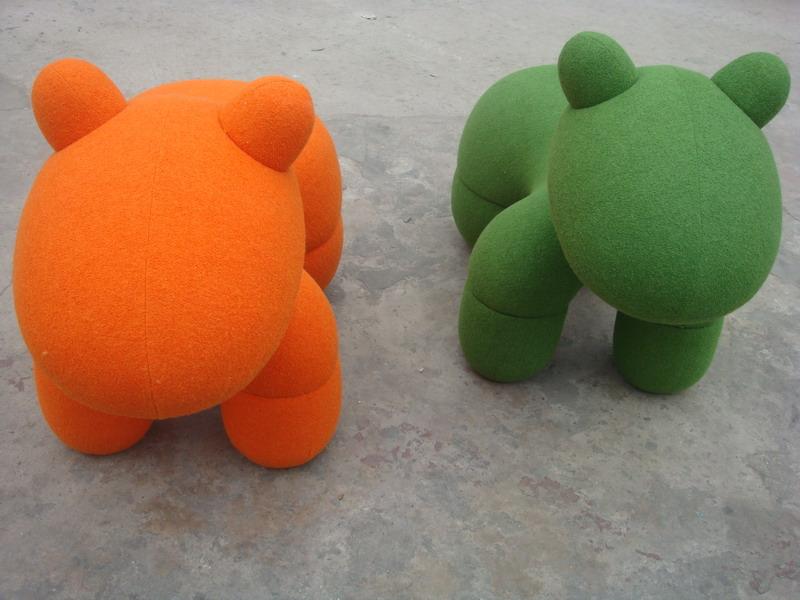 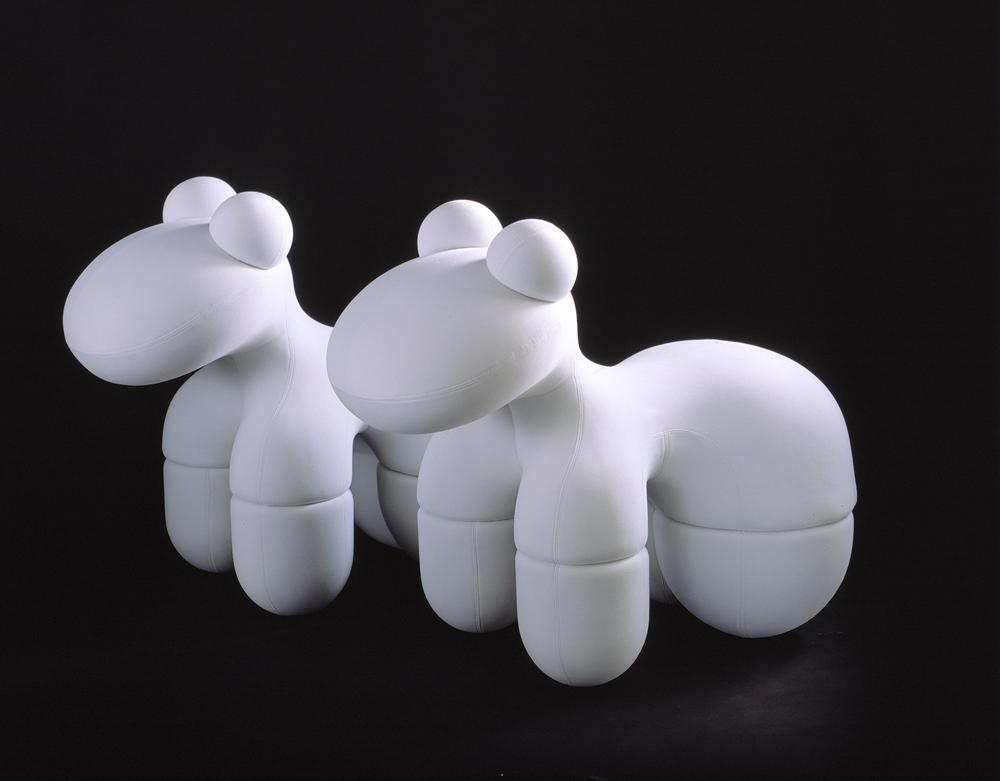 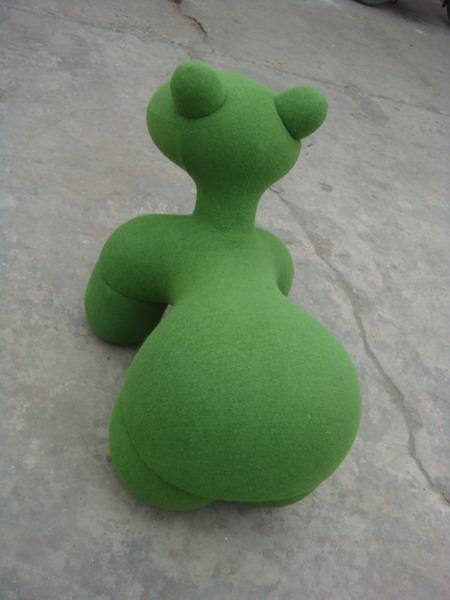 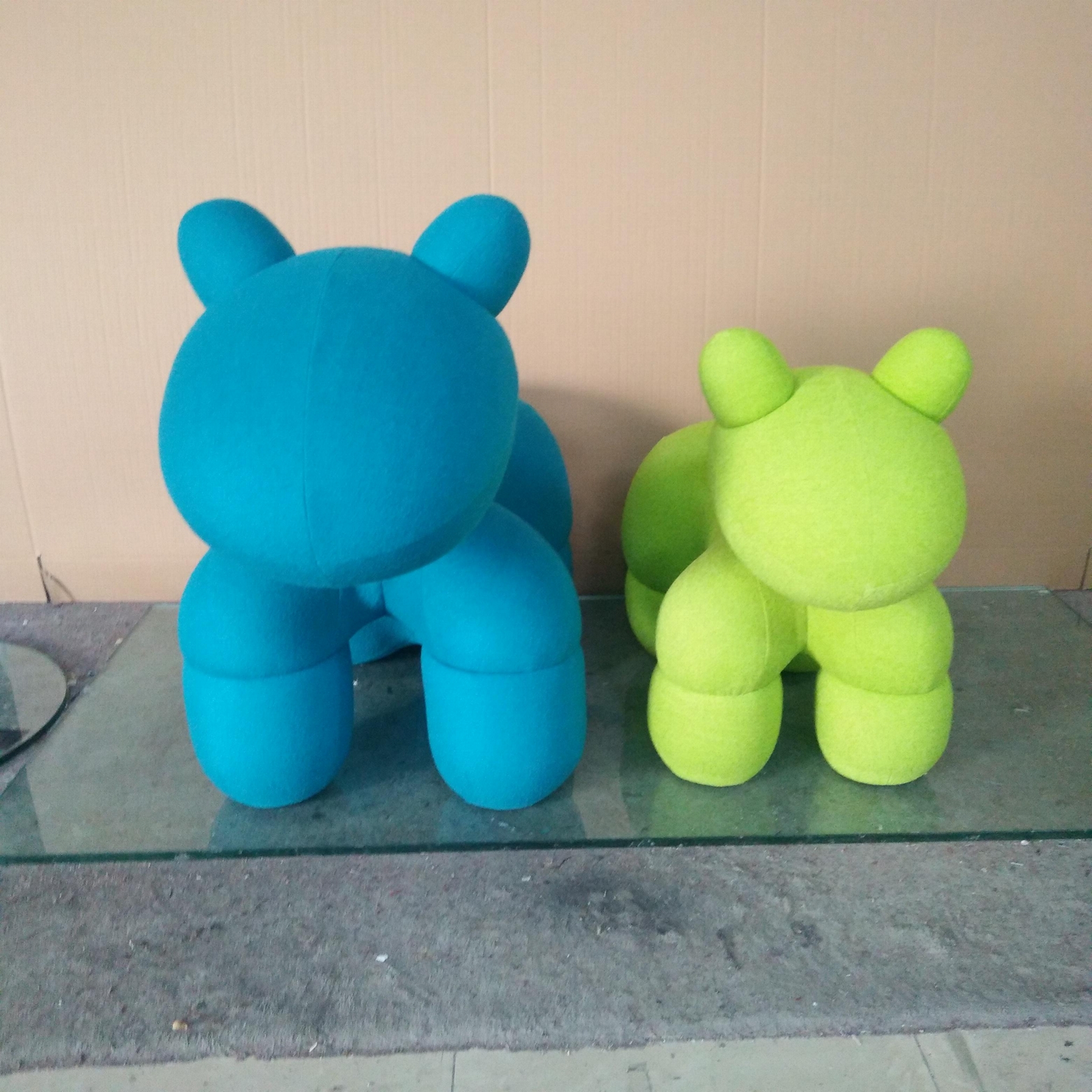 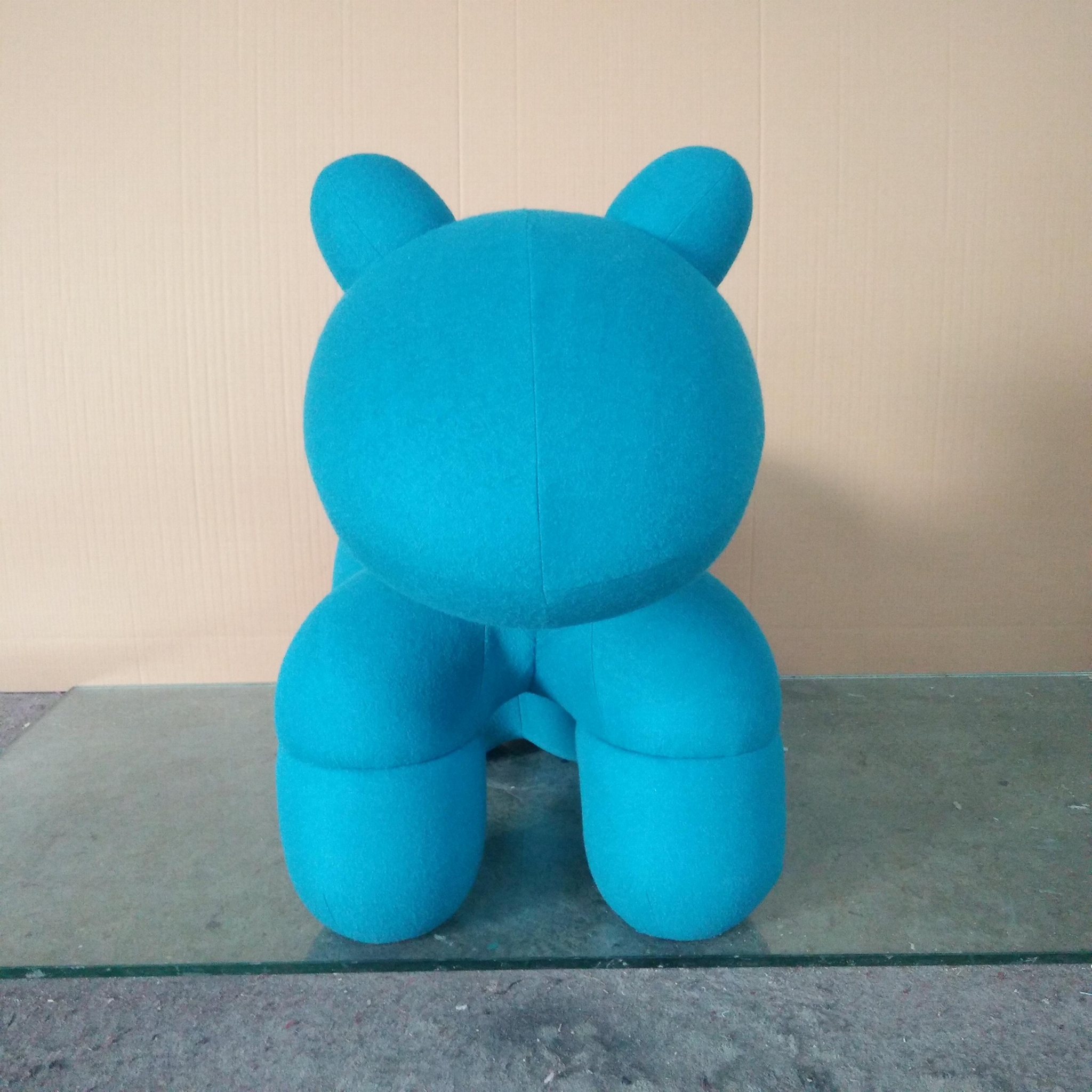 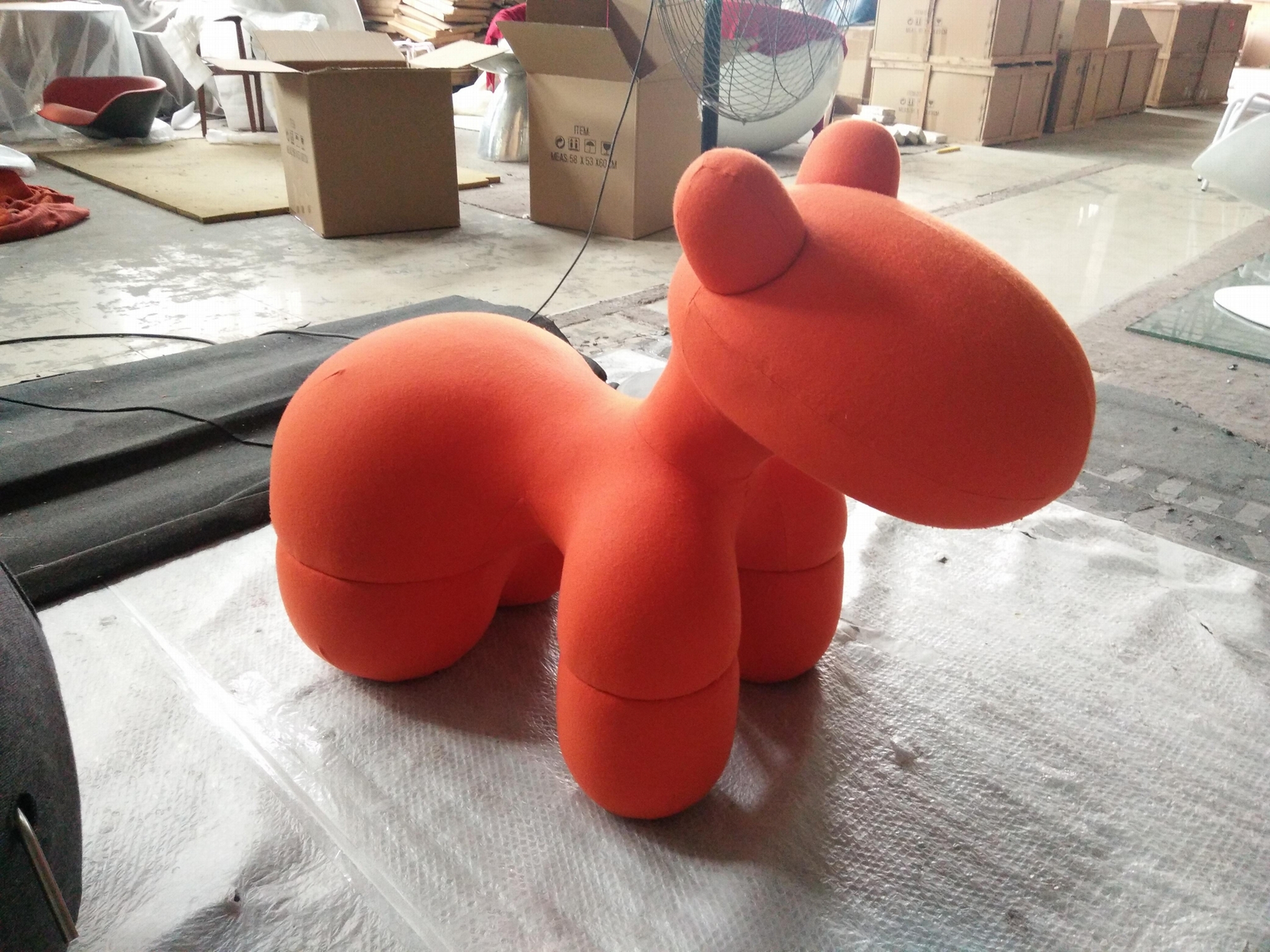 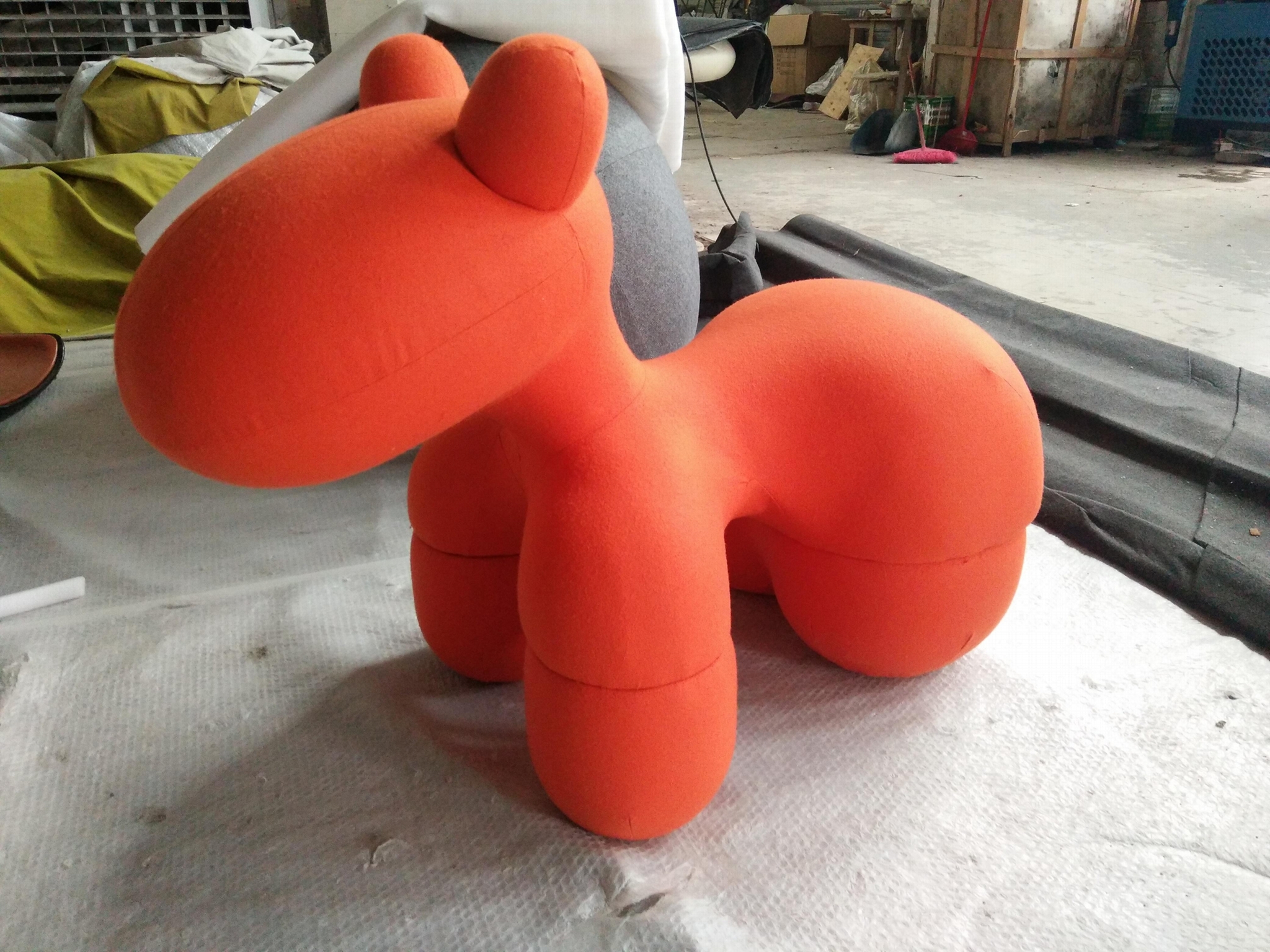 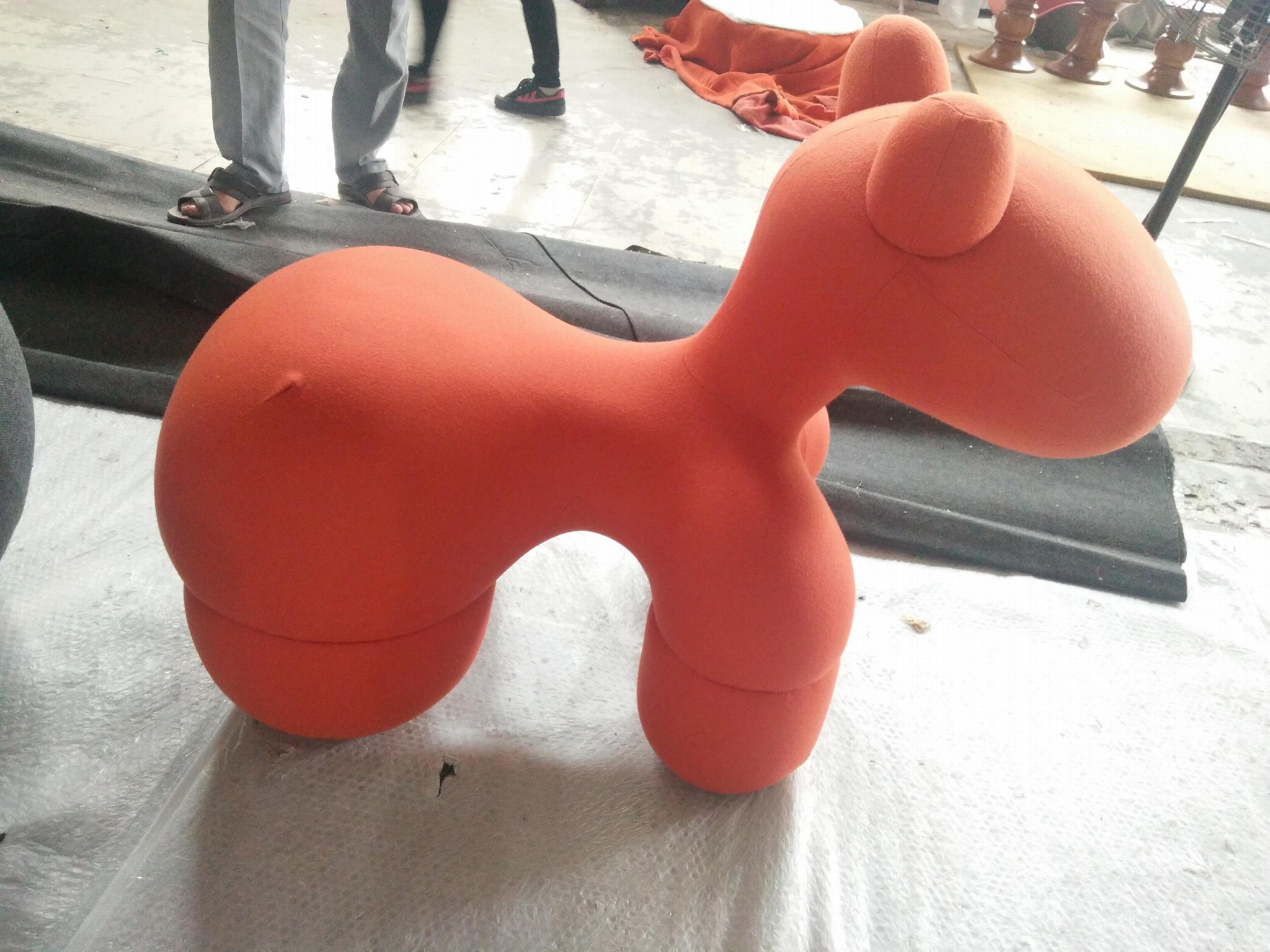